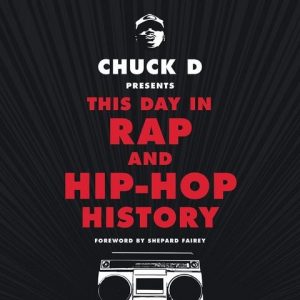 This Day In Rap and Hip-Hop History, with a forward and amazing illustrations by Shepard Fairy, paints a picture of a restless art form that has been constantly evolving and has come to dominate the cultural landscape. Still, D. lays the blame for the way we treat music as disposable nowadays—not just at the feet of the Information Age, as many of his fellow artists do, but as a result of the late-’80s and early-’90s corporatization of radio.

“They took the DJs away,” D. says of the death of independent radio. “Those DJs were a major component in making those records we all love part of our culture, especially in hip-hop and rap music, where the DJ is also performing. But they were delivering information, too. What brings people to it in the first place is the music. But there’s more than just the music that makes people stay. It’s an education about the music that tells you what it is, where it came from, what changes did it cause when it came out. You have got to have a discussion about it.”

The answer, D. tells the young artists he mentors, is to hone their craft.

“I tell songwriters I work with, ‘You’re writing a song, but I’d also like to see if you can write a paragraph about that song, because if you can’t have a discussion about your song, you’re relying on luck,’” D. explains, noting that he takes his elder statesman status seriously. “Sometimes luck makes a one-hit wonder, but if you want to become a skilled craftsman and you want to write songs that stand the test of time—that look at the environment and answer to it—you have to be able to express that. There are a lot of hip-hop and rap writers who are incredible but who have neglected that area, and other artists are not covering them because they’re just not skilled at their art.”

An old-school taskmaster, he also makes sure up-and-coming artists are aware of the most obvious tools they have at their disposal.

“I tell them, ‘That thing right in your pocket—that’s inherently stuck to you—it’s a computer that has access to the planet earth,” D. says he tells every young artist that will listen. “If you want to do rap music, you should understand that it’s all around the world in different languages, and you should transcend what’s presented to you in the United States of America.” Expanding one’s worldview is important for creativity, D. insists, but it also makes you a smarter person. “Following the news is really complex now because you have to have a sharp mind to diffuse misinformation,” D. warns. “You can’t just let news come at you. You have to be web-literate.”